Wireless microphone, also known as wireless microphone, which can restore and amplify sound, is more convenient than wired microphone and more and more popular with consumers. It is widely used in KTV, AV room and conference room. Perhaps so many people still think so: as long as the equipment, you can talk on it. In actual fact, if you do not understand its working principle and the use of precautions, it would not be able to really use wireless microphone. Below, Wo sound engineering to share with you this knowledge.

Wireless microphone mainly by the launch and reception components. The transmitter part is powered by a battery. The microphone converts the sound into an audio signal. After being processed by an internal circuit, a radio wave containing audio information is transmitted to the surrounding space. The receiving part is generally powered by the mains. The receiving antenna receives the radio waves emitted by the transmitting part. After being processed by the internal circuit, the audio signal is extracted and sent to the sound reinforcement system through the output signal line so as to complete the wireless transmission of the audio signal .

BY-MP4 Audio Adapter
The BY-MP4 is a 2-channel audio adapter, with a 3.5mm TRRS cable and a 3.5mm TRS cable which allows you to shoot videos with Smartphone, DSLR camera or camcorder.
This adapter provides you with a compact dual-mic mounting and audio mixing solution, which allows you to easily mount and control two microphones or wireless receivers. It requires no batteries or power source. 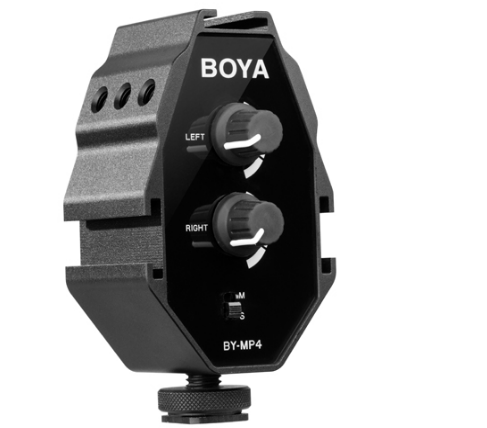 After knowing its working principle, let us look at the wireless microphone to use matters needing attention.

2, working distance and near effect

Normally, the working distance between the Wireless microphone and the mouth is between 750px and 1000px. If the distance is too long, the echo will increase and the noise will increase relatively. Working distance is too close, because of the signal is too strong and distorted, low frequency sound is too heavy and affect the clarity of the language. This is because there is a "proximity effect" on directional microphones, which means that low-frequency sound can be significantly improved when broadcasting in close range. However, sometimes singers intend to use "near talk" to make the singing more wonderful and pleasant.